thick as a brick

i L-O-V-E this album. if you don’t know it, make sure to click on the picture and read the first two or three reviews. 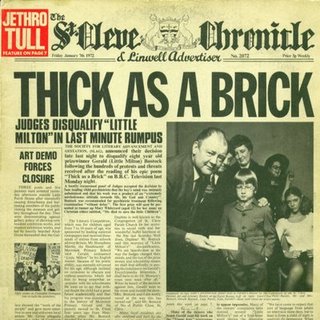 totally unrelated: a couple of things i noted yesterday: 1) food that’s been sitting in the freezer for a while loses its appeal to me because the package smells funny on the outside — go figure. (that doesn’t seem to hold true for ice cream, though. or maybe, just maybe, i haven’t ever left ice cream in the freezer long enough to smell funny). 2) sleeping causes one (well, most) to dream, which actually makes it worth doing. (i’ll explain this one better later; it requires its own post, which i have no time for right now, because i’m getting ready to go out and do what i love most: running!)