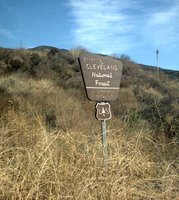 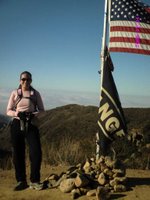 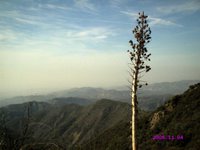 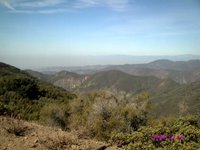 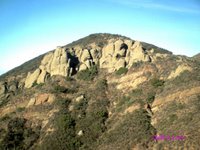 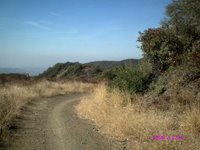 there were 7 of us, including bloggers jessica and jeff. after the logistics of dropping cars off at the finish point, driving to the start, and waiting for the other half of the group to show up, we were ready to go at around 7:15. it was a bit cold, but i was wearing coolmax pants and a coolmax long sleeve shirt, so i figured i’d be ok for both the cool weather and the warmer weather once we hit the sunny parts of the trail, and once it was late morning/early afternoon. i was fine. i just took my gloves off about halfway through the run, and was comfortable the whole time. i also took plenty of water with me, (90 oz), all of which i drank, so i’m glad it was enough. (i always have this “fear” i won’t have enough water on these mountain runs). so it was perfect.

our planned route was to go up santiago trail and joplin trail to modjeska peak and then down main divide and harding. santiago trail was fine. even though we were going up, it wasn’t grueling. we walked a lot, but we were expecting the first half of the run, the climbing part, to take longer and to be harder (obviously). man… when we hit joplin trail things started to get ugly. i began to question if this run had been a good idea at all, and question my running in jessica’s masochistic race, the twin peaks ultra 50/50. i later found out joplin trail isn’t part of the course, so it was all good. this was just jessica wanting to torture a bunch of unknowing victims, and i’ll tell you, she did a good job. i remember at a certain point (on joplin) asking her “how do you come up with these crazy runs”? (i have no doubt that her race will soon grow to be known as the hardest race in southern califonia. so i’ll be proud of having been part of the inaugural run). but oh, was this climb brutal! the trail was narrow, it often had a cliff on the right side, the surface was dusty and rocky, and therefore it had almost no grip. we kept slipping and sliding our way up. it seemed we would never reach the top! there was no running whatsoever on joplin, and even walking up, our pace was pretty pathetic. this trail is right up there with the last 3 miles of the san gabriel mountains 50k, as the hardest climbs ever.

once we reached the top, things changed (for the better). the faster folks were waiting for us, and we had a nice break for nutrition and hydration, properly stationary or even sitting down. that was also when we had the chance of hearing the funniest line of the day: “i’m like, at the top of a mountain so i’m going to be late”. that was greg talking to his daughter. i’m sure she’s still puzzled, even as i write this. we then started down the main divide road, a downhill dirt road. heaven! we all started feeling pretty good, and stayed together for a while, until the faster ones took off again, and jessica and i continued to exercise our back-of-the-pack pace. boy, were we feeling good. by then it was all forgotten (and forgiven, jessica) and we were left with just memories of joplin, and enjoyment of the second half of the run. (which took us only 2 hours, as opposed to 4 hours going up). the last downhill portion was going down harding, and that was great. the scenery was stunning, we seemed to be feeling better and better, and hey, we were getting closer to the finish, too. that counts for something. when we got to the end we found the faster folks having a mini tailgating party (sans beer). we socialized for a few more minutes and then got going. what a fun day!

when i got home i found a couple of bloody toenails, and a few others with blood blisters underneath. i had two that were falling, and now i have eight ready to go. only the pinkies’ were spared. my left shoulder was a bit chafed from the camelbak, and i had a few bloody spots on my legs, from the plants that acted like needles and razors on our skin. but what an awesome run. the best of all running is always the great people you meet. priceless.

(jessica’s account of this run can be found here).