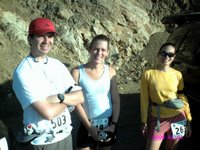 greg and jessica met me in irvine at 5:20. we were supposed to meet jon, michael, and pete at the snail’s pace in fountain valley at 5:45, and kim at the start, but first we needed to get fuel. coffee and muffins, that is. there is a very strategically located starbucks just a couple of blocks from the snail’s pace 🙂 and it opens at 5:30. perfect! then off to malibu we went.

after we got our bibs we found matt, another blogger. we all started on ray miller, a single-track trail. that means the start was chaotic. i had decided to take the back of the pack, but then i had to dodge people left and right to get through. at some point i come across this lady who wouldn’t let me pass her: “this is not ‘passable'”, she said. (i had no problem stepping aside for people to pass me, but apparently this was a problem for her). anyway, i eventually managed to pass her.

the course consisted of two connected loops, both run clockwise. it was very well marked. but a lot of people got confused and did one or both loops in the opposite direction. this is my oversimplified drawing.

from overlook fire road i turned left onto fireline trail. yes! downhill running… halfway through the first loop there was an out-and-back to sycamore canyon aid station. there i had some conquest and a clif shot. i should now stay left to finish the loop and then turn left at some point on overlook fire road to get out of it. i refilled my water bottle and off sycamore canyon fire road i went. since it had been downhill to the station, i at this point had to start going uphill again.

when i was out of the loop and back on ray miller trail my bladder felt like it would explode, and i couldn’t care less if there were people around or not. (there weren’t, anyway). i enjoyed the downhill run back to the start/finish aid station.

jessica had already finished the 9k, and was there to cheer me on. i had a can of coke and filled my bottle with conquest before taking off. i had aid at 5.5 miles and at 11.1 miles, but now i was in for a 7.5-mile stretch without aid… my plan was to drink very conservatively until around mile 15, to make sure i’d have enough fluids to get me to the finish. 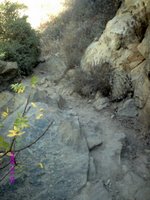 off to la jolla canyon trail i went. another uphill battle. the climb was tough. i walked a lot from this point on, adding to my already pathetically slow time. la jolla canyon trail was steep and very rocky. i was tripping quite a lot i had to take a break. so i sat down and rested for about 1 minute. 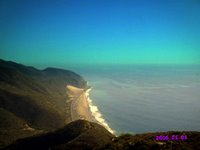 further along i made the left onto la jolla valley loop trail. with the excuse that i had to look at the map, i sat down again for another minute. i then started on mugu peak trail, struggling a bit on this climb. but the views of the ocean were stunning! i stopped for some photos, and when i was done climbing i crossed paths with kim, who was doing the 50k. 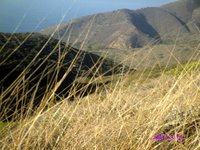 i finally started the descent on chumash trail, a vast meadow with very tall grass. i passed this guy who asked if i was doing the 30k. “i thought i was last” he said. he later passed me. i guess even people who are used to being last don’t expect to find someone as slow as me. 🙂 i then soon came to the end of la jolla valley loop trail, turning left onto la jolla canyon trail, to exit the looop and head back to the finish. 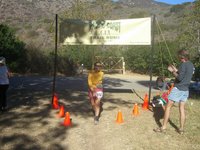 greg and jessica were waiting close to the finish line to take pictures. oh, when i finished i drank the best sprite ever! we stopped at tommy’s on our drive back for fuel replenishment 🙂 and headed back to the snail’s pace. i drove home riding a great runner’s high! (gotta love it!)

race official numbers: 18.6 miles in 5:09. my garmin read 4:46, and this 23 minute difference is due to the fact that it was set to pause the timer whenever i stopped running. which were, approximately, 13 minutes before i could get on the trail at the start, 3 minutes at each aid station and 4 stops of about 1:00 each during the second loop.

it was a great day. a very well organized race. i had a blast! i’m sure everyone did. it was a hot day and a struggle at some points,

but in the end all is forgotten and just the good impressions remain. i’m all pumped for the high desert 50k in two weeks!