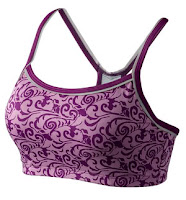 i never paid much attention to what kind of bra i would buy for running. i’d pretty much just go to target and grab whatever “generic”, cheap, “sports bras” they had in size small and not give it much thought. my main peeve about these bras, though, is how the shirt (even the coolmax ones) will “stick” to the bra instead of just flowing freely.

so when i was offered my unique choice of a moving comfort sports bra to try out i was both curious and skeptical. maybe i would finally find out what is so special about bras made specifically for running, as opposed to those flat, stretchy pieces of cotton i was used to wearing. or would i?

i picked the alexis printed bra for two reasons: it’s PURPLE! and it does not have complicated straps (some bras had straps that cross in back and i’m sure my clumsiness could cause me to choke). the bra and its uncomplicated straps are true to size, and i mean real bra sizes. i got the size that was supposed to fit, a 32A, and it did. perfectly! (the ones at target only came in small, medium or large, with not much attention to cup size or inches around).

the overall “feeling” of this bra is comfortable, definitely not tight, and supporting (as much as an A-cup person can claim that a bra provides enough support). one thing i did not understand or care much about was the padding. i never buy any kind of bra that has padding, so it felt weird to have those on. especially while running. i got used to them after a few runs, but i did look like a an alien without nipples.

the material is wicking, and the shirt won’t stick to it, yay! the fabric did not hold any odor after washing either (i sweat a lot, so I can vouch for that). i washed it quite a few times and the soft, comfortable feeling was not lost.

this is a well constructed bra, and even the seams go unnoticed. i had no chafing, sliding or dig marks from either the straps or the chest band. it is by far now my best running bra and i need to buy a couple more. i’m not sure i can go back to the other stuff i have, plus they are pretty old, so i won’t feel bad replacing them. i will just try to find a model without the padding (this has proved quite difficult with regular bras) as i did not care much for the alien look…

so it turns out the running bra issue is pretty much like the coolmax issue for shirts, shorts and socks. once you try it there is no going back to cotton gear, or cheap, generic bras.